AUVSI Saguaro Chapter co-hosted International Drone Day (IDD), along with the youngest IDD team, Moxie Girls, an all-girl computer science club at Sierra Verde STEM Academy, where the event took place. The first IDD event in Phoenix, AZ saw roughly 100 people from the community come out and explore all the different drones flying and on display.

The goal of the day was to highlight the ways that drones are positiviely impacting Arizona, showcasing that drones are good. It was an opportunity for those in the community to interact with the technology. A favorite quote was from a young girl who said “I had no idea drones were this much fun. I am going to definitely get one now”.

This public display showed the city mayor how the community positively views drones. The City of Glendale prohibits the use of drones in the city parks (Article III, Division 2, Sec. 27-51). It was monumental for the City of Glendale, Mayor Weiers, to come out and have personal interaction with the IDD community and see the types of technology on display. He talked with the Moxie Girls, who had a recent drone build at Sierra Verde, and had the opportunity to fly a DJI Matrice 600, thanks to Innovative UAS. Mayor Weiers was very supportive of the technology, and AUVSI Saguaro Chapter looks forward to working with him and the City of Glendale on the city ordinance.

Flite Factory set up a drone race course on the school field and many fpv drone pilots came out for a “fun fly”. RETHINK Real Estate and LMP360 Media had a drawing for a drone! A Sierra Verde female student was thrilled to have won. 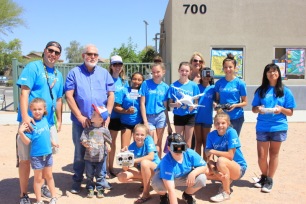 It was a great day had by all and a day of education and showcasing drones are good! 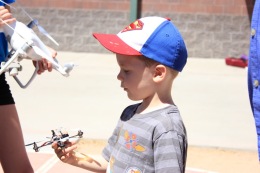 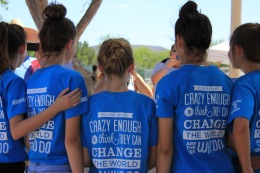 Moxie Girls is an all girls club started to help empower girls to break the stereotype boundaries in computer science. Most people think that that kind of thing is more something for a boy but we are going to prove those people wrong. This is the club’s first year and we are anxious to show these girls how amazing and powerful computer science can be.